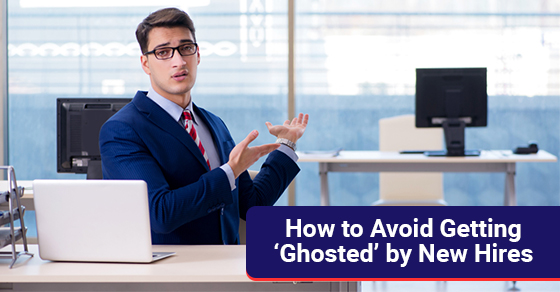 Keeping the wheels of business turning is an economically and morally motivating principle. To run an organization in a way that is financially productive while also employing people and boosting their spending requires the capability to manage all aspects of the company in the best possible way.

And one of the core elements in this puzzle is human resources. Integral to every high-flying business, from Google to Marriott, is the reliance on having the best people, contributing their passion and ideas to a greater whole.

Within the subcategory of HR there is a whole area devoted to the hiring process, from choosing the best candidates, running reasonable interviewing and testing processes, and then onboarding the new employee in a way that gets them quickly acclimated to the business.

Considering all the effort that you’ll inevitably put into each new hire, you want to make sure that they actually show up for the job. Here’s how to guarantee that your prospective worker won’t abandon ship or leave you out in the cold before the work’s even begun.

The term ‘ghosting’ originates from social media slang and refers to the tendency for some to simply stop responding to messages.

In a workplace context, this is what happens when at any point through the hiring process the candidate stops communicating and doesn’t respond to further inquiry.

A study has shown that this phenomenon is relatively common with 83% of recruiters reporting that candidates had ghosted them. 69% said ghosting had increased in frequency over the past few years.

Some examples of ways that ghosting can occur include not following up to interview calls, missing interviews without prior warning, or even worse accepting the job offer only to not show up at all. Ghosting can even happen on the job if they stop showing up within the first couple of days or are unresponsive to emails and messaging.

Why do people ghost?

One of the major reasons that someone will ghost you is because they have found a better opportunity and are not comfortable telling the truth to an organization or recruiter. Unfortunately, this type of occurrence is unavoidable in the workplace but it’s rude and inconsiderate. Still, considering many people don’t like confrontation, it makes sense that they would avoid explicitly rejecting a prospective employer.

Another reason someone might ghost your organization is if they feel undervalued in terms of what salary or benefits are offered. If they don’t find the employee experience compelling they may cut ties.

While some instances of ghosting are unavoidable, a great deal of the time things can be done to prevent ghosting.

One thing to consider is the speed of your hiring process. The best candidates will only be on the market for a few days before they’re taken up by some other company. You want to hire as fast as you safely can, while also working to engage the employee and keep them informed so that they’re more likely to leave the option of your organization open.

It can also be good to gauge actual interest in the role. While all interviewees will say they want the job at your organization, their body language or demeanour may give away how genuine they are. To get verbal and non-verbal cues you can analyze try asking direct questions like these:

It can also be useful to try a few times before giving up the ghost. Don’t let initial silence discourage you, try to send friendly, genuine follow-up messages that reiterate your interest. Try linking to stories they may find interesting and if they don’t respond from there at least you know you tried.

When it comes to the offer stage, make sure to set clear deadlines so new potential hires know when to expect to hear from you.

If they’re already working in your organization and you fear that they may ghost while on the job, it makes sense to improve the employee experience as much as possible. This can be as simple as explicitly saying ‘thank you’ and making the employee feel acknowledged for their hard work and contributions.

It might also involve changes to the work environment. This could mean cutting down on infighting and company politics, or it could mean being genuinely inspiring in your management. Be careful not to micromanage or get too in the face of your new hires. And of course, the classic pair of respect and good listening will win you a lot of hearts and a lot of points.

What to Do if the Worst Happens

So you’ve done the above but they still end up ghosting you. While frustrating it can also be a motivation to change things up.

This could mean reviewing and editing your hiring processes, like making them shorter as mentioned above, or making them more engaging.

It can also make sense to start building up a larger pool of candidates for the times when you have a vacancy. Having a group of potential hires will mitigate the risk of any of them individually ghosting and leaving you in the lurch like what just happened.

Of course, it also makes sense to contact the candidate and ask for an explanation of why they ghosted. The insight they can offer you might be invaluable.

In some instances ghosting is unavoidable. But in others, it can be prevented. There are many steps you can take to mitigate the risk of it happening, from changing up your hiring processes to creating a positive and engaging work environment. Regardless, any improvement is a step in the right direction so don’t lose hope.

For more information from a top finance and accounting recruiting firm in Ontario, please call AHK Accounting Recruiters at 416-508-1713 or contact us here.